THE BASICS: A gym-based group class on Upper Street, close to Highbury & Islington Station. The point is to complete a structured gym workout wearing a heart rate monitor, with the aim of working hard enough to keep your heart rate in the “orange” zone (between 65-80% effort). Your personal zones are worked out before the class by providing a few stats. Heart rates and effort are displayed on screens around the gym as you workout. Trial session free!

THE CLASS: When I was invited along to try out the new David Lloyd Orangetheory class, I really didn’t know what to expect (I’m beginning to wonder if I ever know what to expect from any class?! In truth, I just walk around with my mouth open, catching flies, exercising purely by accident). When I popped in for the 8.15pm class last Wednesday, the foyer was buzzing.

After filling in some forms, I was given my heart rate monitor strap and a little counter that popped onto the strap. I was advised how to put it round my rib cage, as close to my heart as possible- it sat tucked under my bra strap.

Once I was firmly strapped in, I couldn’t feel my little monitor, but it was flashing; confirmation that I was indeed alive- hurrah! There was a big crowd waiting outside the studio- around 20 in all. We went into the big modern gym with treadmills, cross trainers, rowers, a free-weights section and mats etc. There was a lot of orange everywhere, as you would expect! Newbies like me were advised to start on the treadmills for the warm up, and others dotted themselves around on either mats or rowing machines.

Our instructor Zagham introduced himself as the music started. 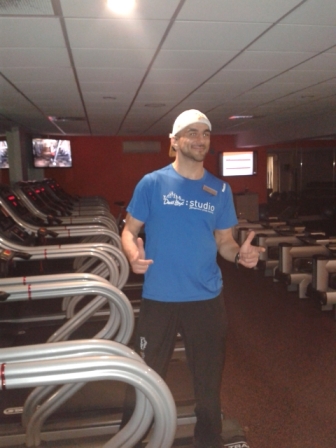 As if by magic, all of our heart rate readings popped up on the screens around the gym, with our names displayed above our readings. Each person was assigned a little square on the full screen, so our live results were all displayed together. 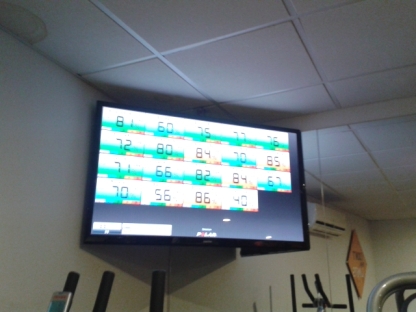 I admit was a bit nervous that this would suddenly make me start competing to get the highest heart rate in the class, and end up feeling crappy if I wasn’t as good as others. However, this didn’t happen. I didn’t really have time to measure myself against others as the workout progressed! Instead I used the screen to monitor my own progress, checking I wasn’t slipping into the zones below Orange for too long a period of time. It was actually very motivational to have your effort in an easily readable format right there in front of you (more on this later!)

Our warm up was fast and got me into the orange zone pretty quickly. Treadmill, few minutes on the rowers, and a 2 minute plank had sweat dripping off the end of my nose. I was left wondering how I was going to manage an hour of this!

We were split into two groups after the warm up, half on treadmills working on short, sharp intervals, and the other half on free weights working through a session that was overseen by Zagham.  He was really good at moving between the groups and instructing us all- keeping 20 odd (sweaty) plates spinning in unison!

The treadmill section was first for my group. I’m not a natural runner, but I definitely do enjoy it once I am in the zone- this section was still HARD. My desire to keep my little monitor reading in the orange zone meant I pushed my body as far as it would go. I admit though, I wasn’t able to keep up with either the speed or the incline we were instructed to for the whole treadmill workout, my legs just wouldn’t go that fast. However, I did try really hard, and was ready for a lie down after 20 mins and 4km of really intense work.

We got off the treadmills and my legs felt like rubber bands. This was NOT time for a rest now though…. Over to weights while the other half of the class took on the treadmills we’d just conquered!

I picked up some 2kg handweights to do the bench work, and Zagham came over and said “you can do heavier than that!” in a friendly way, and swapped my 2kgs for 3kgs. I nearly died; I’m such a wimp! Lifting the 3kg in unfamiliar bench press style also started to hurt my elbow- I think because I’m still not really strong, and let weights pull down on my joints, rather than keeping my muscles taut and using muscle strength to lift properly.

So, naturally, being the devious little hypochondriac I am, when he came back over and saw I had swapped back to 2kg, I whinged that it was due to (the self-diagnosed and rapid onset of) hyper-extendable joints. I went on to imform him that my elbow was probably at risk of snapping in half right there and then if I tried to pick up a 3kg weight again.

All kudos to him, he didn’t burst out laughing at me, but the corners of his mouth did quiver; he and I both knew I was making up a complete lie to cover up my weedy little arms. I think we were both pretty sure that laziness rather than hyper-extendable joints was the problem here. I slunk on with my 2kgs and decided to get a doctor’s appointment to get this very serious medical issue sorted out.

Anyway- I got so wrapped up in the technique of the weight section that I forgot to look at my little heart monitor reading much. If I had of done, I think what happened at the end might have been avoided!

After the weights section and warm down… results were in! And mine, hmmm. Let’s just say, this class is called Orangetheory…. I think I got a bit confused and thought it was called Bluetheory. I PROMISE I worked hard on the treadmill at least! The “hyper-extendable joints” are definitely to blame for the second half. But seriously- look at the first 30 minutes or so! I am MAINLY ORANGE!!*

THE VERDICT: The structure of this class was like a combination of two things: 1. having a PT session, and 2. as if I had been given a structured programme of working my way through a normal gym, with the focus on keeping my heart rate up. If you are a straight up gym bunny rather than a novelty class fiend, then I would definitely recommend Orangetheory as a way to up the tempo of your workout, mix up your routine, and feel encouraged to push yourself.

I was initially worried that the screens would make me feel competitive against everyone else and then demotivated if I couldn’t keep up- they really didn’t! Instead I think they made me feel motivated and also gave a good indication as to where I was and whether I should be pushing myself that little bit further. Highly recommended class, especially for those who struggle to get motivated!

THE EXTRAS: Don’t forget to give your heart rate strap back in at reception! I walked home with mine still on and had to sheepishly take it back in later that week- with my sweat dried onto it- errr yeah, sorry about that guys!

Ps. More of these funky little studios will be popping up on your high streets… keep your eyes orange-peeled!