A good friend of mine recently found out he had a place in the Berlin Marathon. Recently, as in, he found out when he only had 6 weeks left to to train for it. That’s 6 weeks to train for 26.2 miles. I had almost choked on my glass of wine when he casually dropped his confirmed marathon place into the conversation.

A couple of things worth adding here- this dude is a bit of a veteran, with a couple marathons under his belt already, as well as numerous halves, the most recent being the Hackney Half in May (that I had been desperate to watch but was instead lying in bed with a broken rib, moaning to anyone who’d listen and eating far too many peanut butter blondies, having convinced myself of their healing properties).

The second thing worth mentioning is that my friend is in a wheelchair, and so would be taking the race on in a made-to-measure racing chair (it’s literally the coolest thing I have ever seen). Expected Marathon finish-times in racing chairs tend to be around the 2hr 30min mark- which is what you’re looking at for the Mo Farahs and other olympians who rack up the 26.2 miles using leg rather than arm power.

All of the above basically of this means that 6 weeks to train for a marathon, with a relatively recent half and a lot of previous practice under his belt, was going to be tough but not impossible.

And so, the training schedule has gone up on the fridge, and he’s been working his guns off to get 26.2 mile ready over these past few weeks. As his miles were totting up on his instagram feed, I got that creeping feeling of Marathenvy, and if I hadn’t suffered such indignity in Paris back in 2007, I would have done that inadvisable thing where I signed up just because I got over-excited that someone else I know has signed up. (Also experienced after cheering on thousands of amazing people completing the London Marathon, where you promptly dash home and sign up for next year’s ballot, without actually thinking it through).

ANYWAY, luckily my noggin has been able to stop my hands from signing up for another big race that my body isn’t designed for, BUT I have been lucky enough to go training with my friend round Greenwich park- me in my day-glow trainers, him in his racing chair. 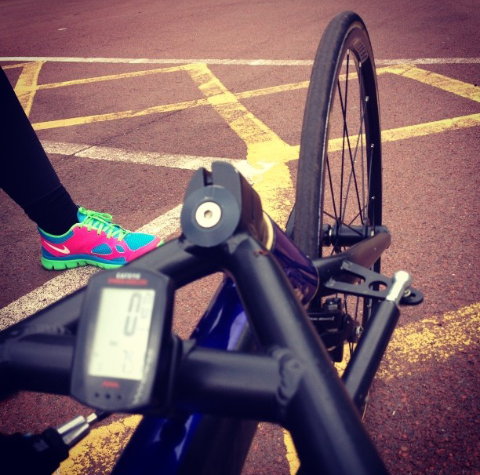 I’ve learned so many interesting things about how one runs a marathon in a racing chair- you don’t use your thumb and fingers in the way you’d assume when pushing wheels, instead they are all bound up in gloves and you just bash the shit out of the edge of the wheel at a certain target point, which means you pick up speed and can keep it going a lot faster (and also, I guess, reduce the risk of getting delicate fingers and thumbs injured, although they do get sore, just like your feet do in trainers).

Also- because your hands are bound, you can’t do things like pick up drinks and eat gels. So- two full bottles of water are popped in the front of the chair with straws, and the racer just has to hope they don’t want any more water during the 2.5 hour slog. These straws are also rather cunning in that that also make excellent nose-itchers.

So, how do we go for a jaunt around the park together, considering he can hit an average speed of around 12 miles an hour, and my jogging pace is little more than a fast walk of 5 miles an hour? A four minute miler, I am not.

Well, although we can’t go along side my side on flat ground, we picked a route and set off in opposite directions around it, with the idea being we’d keep bumping into each other round the track with a friendly wave and the motivation to keep going.

It should have worked perfectly, except we forgot to factor in my sense of direction is only able to follow the command of “go in a straight line until you hit the sea” and so alas we didn’t see each other for about 3/4 of our park time, simply because I am an idiot.

Still, when we DID catch up with each other, it was as I jogged down a rather steep hill and was suddenly aware of my friend, casually cruising alongside me. Well, that was it. A quick, competitive look at each other, and we were off. He backed off the resistance and picked up speed instantly down the hill, and I absolutely floored it into a sprint. As he disappeared off to the bottom of the hill and I lagged behind, despite putting every last ounce of effort into my sprint, I suddenly had an image of myself flying through the air and faceplanting simply because I was trying to win an un-winnable race, and slowed down to a sensible jog to meet him at the bottom of the hill.

He’d won this one.

We stopped for a little hello, and then the final challenge was stretching ahead in the form of a VERY steep gradient- back up the hill we were headed.

Someone jogged past us and clapped him for attempting the hill (I was still getting used to the amount of attention such a big racing chair got in the park, and was about to launch into a tirade of abuse at clapping man for being so effing patronising, but luckily my friend was on hand to tell me to calm down and just accept that people were interested in something a little bit different).

After my tiny tantrum at society, we turned to face the hill. Time to tackle this!

He kept up a methodical rhythm with his arms and crept up slowly. I was also trying to power my way up, and it was about 30 running steps until I was out of breath and really struggling with the gradient. I was able to climb the hill faster than he was, but I decided to loop back and to carry on beside him every time I made too much of a distance between us. This meant I essentially climbed the hill AT LEAST twice (and I won’t hear different!!!) but that, nicely, we got some time to train side by side. It was like nothing I’d tried before during a run, and an immense amount of fun!

We finished at the top and headed back to the car, with a couple of kids asking for a photo with my friend in his racing chair on our way (I know it’s just human curiosity and he DOES look immensely badass in it, but seriously, people!!!)

It’s now 3 weeks until the marathon which I am excited to be going out to Berlin to watch him complete, especially now I’ve seen the “Rollstuhle” in action and has a good park sesh with him. My only concern is if I actually manage to find the race track on Marathon day and not just wonder off in a straight line and only realise my mistake when I reach the east coast of China.

Stephen was raising funds for Back Up– check them out!